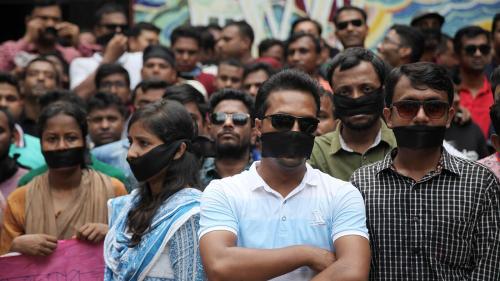 Bangladesh authorities have imposed a lockdown in five Rohingya refugee camps in southeastern Bangladesh after an alarming spread of the coronavirus, officials said.

The shutdown will initially last for a week, until May 27, Shah Rezwan Hayat, head of Bangladesh’s Refugee Relief and Repatriation Commission, said on Friday.

A total of 863 COVID-19 cases and 13 deaths have so far been reported among the more than a million Rohingya living in 34 camps in Cox’s Bazar district after they fled persecution in neighbouring Buddhist-majority Myanmar.

They include some 740,000 Rohingya refugees who fled a deadly Myanmar military offensive in August 2017.

The first COVID-19 case was reported in a camp in May last year, more than two months after Bangladesh reported its first cases in March.

The district chief of health services, Mahbubur Rahman, said the number of cases has risen alarmingly in the camps over the last couple of days.

“All five camps have been completely closed,” he told AFP news agency.

Law enforcement agencies were asked to strictly monitor the lockdown so that the residents stay indoors. Shops and transportation services in the area will also remain closed.

“The infection number is alarming,” Anupam Barua, the principal of Cox’s Bazar Medical College, told AFP. Barua has been monitoring the coronavirus situation in the camps since last year.

Since the virus was detected last year in the camps, Bangladesh authorities have tightly controlled visitors’ entry into the area, amid fear that COVID-19 could wreak havoc in the squalid and extremely congested settlements. The restrictions helped keep down cases and deaths.

An international aid worker told AFP the authorities have used loudspeakers to warn people in the camps of the restrictions.

A senior police officer said they have stepped up security and set up checkpoints in the settlements.

New cases and deaths were also rising among the host populations, Rahman said, prompting authorities to impose a lockdown in the southern-most border town of Teknaf.

Bangladesh, which logged 785,198 cases and 12,284 deaths since the pandemic began in March last year, imposed a nationwide lockdown in early April this year shutting offices, shops and transports.

The government allowed shops to reopen and transport to resume on a limited scale in the cities ahead of the Eid al-Fitr festival on May 14.

Bangladesh launched a COVID-19 vaccination drive in February and some six million people have received one or two doses, but that campaign has not reached the Rohingya refugees.