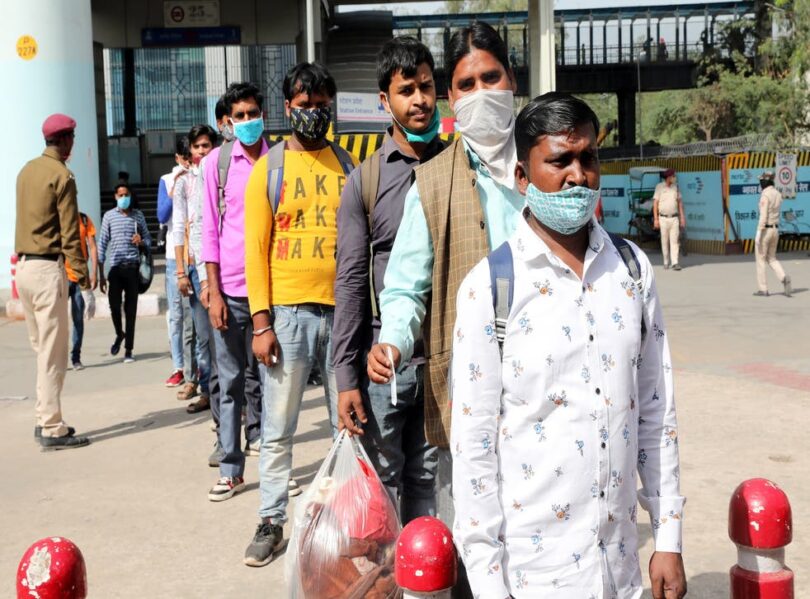 In the past year, Jagdev Pandey has lived three lives.

Last summer, the 37-year-old migrant worker lived in a one-room rented house in a working-class neighbourhood in the eastern part of India’s capital, New Delhi. He had a stable marketing job with a company manufacturing aluminium foil paper.

In July, during the monsoons, the company shut down due to the COVID-19 pandemic and a nationwide lockdown imposed to check the virus.

Pandey was forced to go back to his village 700km (435 miles) away in the Siddharth Nagar district of Uttar Pradesh, India’s most populous state.

After months of unemployment, he returned to Delhi in the winter only to find himself at a homeless shelter, living off the money he can make by painting walls. He now shares a sleeping hall and a common washroom with 12 strangers.

“My life changed like seasons,” said a masked Pandey, sitting outside the shelter, not far from a rented room he had called home last year. The proximity is a constant reminder of all he dreamed of when he migrated to the city six years ago.

Before this year’s lockdown in Delhi, he was painting walls for about 10 days a month, earning a daily wage of 500 Indian rupees (less than $7).

Pandey feels that migrant workers like him, who travel back and forth – his wife and two children live in the village – and whose livelihoods have been hit by lockdowns should be prioritised for vaccination. But there is one big problem.

“I have no idea where and how to get vaccinated,” he told Al Jazeera.

Experts say many of India’s 140 million migrant workers run the risk of being left out of the ongoing COVID-19 vaccination drive either due to a lack of awareness, want of a targeted strategy, or a severe shortage of doses.

The trend is sharper for adults below 45, the age group that most migrant workers are in. Vaccination for this group started on May 1.

S Irudaya Rajan, chairman of the International Institute of Migration and Development (IIMAD) in Trivandrum, Kerala, said migrant workers were stigmatised as carriers of the disease and their vaccination should be prioritised.

“Migration-prone age group, especially inter-state migrant workers, are mostly less than 30 years. They should be prioritised for vaccination because they are the ones moving and so their risk factor is much more compared to others,” he told Al Jazeera.