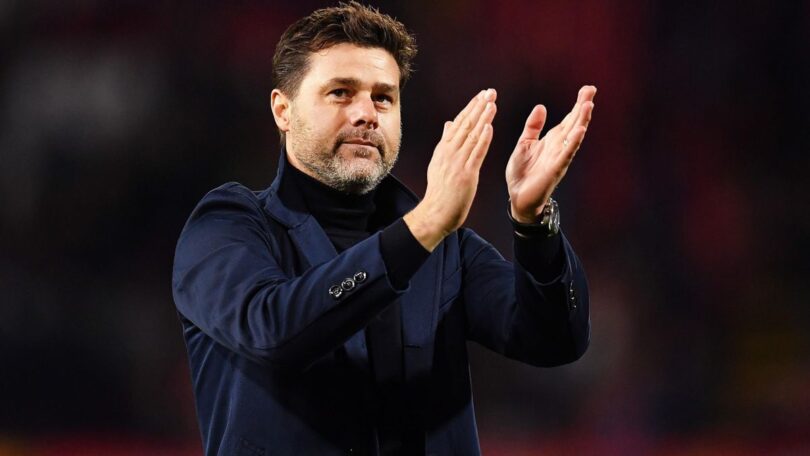 Mauricio Pochettino was sacked by Spurs in November 2019; he won the French Super Cup and Coupe de France with PSG after taking over at the Parc des Princes in January but failed to deliver the Ligue 1 title

Spurs chairman Daniel Levy wants the Argentinian back after reportedly acknowledging he made a mistake to sack him and replace him with Jose Mourinho in 2019.

The club’s strategy after sacking Mourinho earlier this year is now to get Pochettino, who is said to be unsettled in the French capital, back at Hotspur Way and hope it can help persuade Harry Kane to end his pursuit to the exit.

Talks are underway but it is far from a done deal, with PSG reportedly keen to keep him despite missing out on the Ligue 1 title this season. He did win the Coupe de France and French Super Cup.

Pochettino also has a year left on his PSG deal plus an option for another – but his family are said to have remained resident in Greater London and his son Maurizio plays for Watford, having joined them from Spurs in January.

His reappointment would go a long way to appeasing disgruntled Tottenham fans who have seen their club take a nosedive since Pochettino’s heyday, especially this season; finishing seventh.

Spurs have been making a detailed appraisal of their situation since Ryan Mason took temporary charge and oversaw the final few games of the season, including defeat in the Carabao Cup final to City.

Despite being in talks over a return, Pochettino was quoted on PSG’s website on Thursday discussing future plans at the Parc des Princes.

“With this way of working, and with the desire to be able to develop other kinds of ideas on the pitch, it will be possible to do great things in the future,” he said.

“I think that in football you are never satisfied because perfection doesn’t exist. But we are always looking for that satisfaction that we can’t find, because I always believe that football challenges you every day and that from season to season you have to be better and better.”

Pochettino also said he and his players had missed playing in front of supporters, adding: “This is something that hopefully will be solved soon and we will be able to have this strength again and, with our fans, create this bond that makes the team better and will help us to achieve the goals that we have set.”