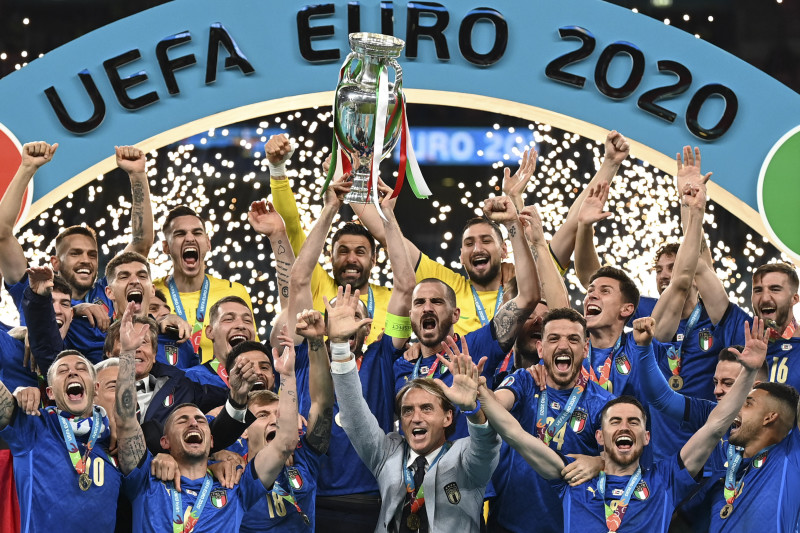 Euro 2020 team of the tournament, from Donnarumma to Raheem Sterling, substitution and manager.

Confirmed his status as the one of the world’s best goalkeepers with a brilliant performance in the final that earned him Uefa’s player of the tournament award.

Walker was rarely given licence to show his attacking ability but was a solid presence in defence and his versatility allowed England to switch fluidly between formations.

Quickest to react when scoring Italy’s equaliser in the final and performed a defensive masterclass against Raheem Sterling and Harry Kane.

If anything, the 36-year-old seems to be improving with age. Led his team to victory through sheer bloodymindedness at times – just ask Bukayo Saka.

Left out of the opening match against Croatia for Kieran Trippier, the Manchester United defender was outstanding in both positions he was asked to play and as well as starting and finishing England’s brilliant goal in the final, he contributed three assists.

The 18-year-old took his Barcelona form on to the international stage and ended with the award for best young player, having completed an astonishing 429 of the 465 passes he attempted in six matches – a 92% success rate.

He was fortunate not to be sent off in the final for an awful challenge on Jack Grealish and missed the chance to win the shootout but Jorginho has been the tournament’s outstanding deep-lying midfielder.

An indication of the Leeds midfielder’s growing importance to Gareth Southgate as the tournament progressed was that he stayed on for the every minute of the semi-final and final.

Was used as a substitute to great effect in extra time against Austria and became Italy’s most dangerous attacking player from then on.

In a tournament where many of the big-name strikers failed to catch fire, it was the player who scored the goal of the tournament against Scotland who kept finding the net.

England’s most-capped player at Euro 2020 came into the tournament with many questioning his place but ended it with three goals and belated recognition of his importance.