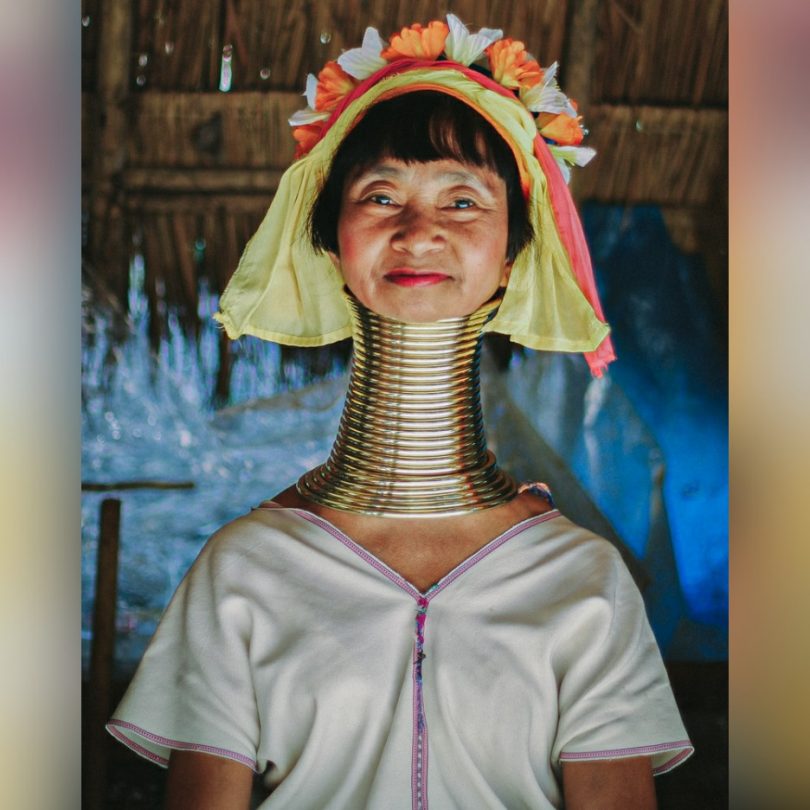 The longest human necks extend to 7.7 inches, belonging to women in the Padaung tribe in the highlands of northwestern Thailand. This is about twice the length of an average human neck. As a cultural practice, the tribe fashions heavy brass rings on a female’s neck from the ages of five to nine and add more as she ages.

Padaung women bind their necks with heavy brass rings that alter the shape of the neck and shoulders. A study conducted in 2018 by researchers from Otsuma Womenʼs University found that these rings had increased the distance from the suprasternal notch to the lower jaw (i.e., just above the collarbone to the chin) to as much as 19.7 cm.

The rings are made from coiled brass wire roughly 1.5 cm in diameter – that has been warmed and bent to follow the shape of the neck. Padaung women are fitted with their first coils between the ages of 5 and 9 years old, with more added as they grow. By the age of 45, Padaung women may have as many as 32 coils wrapped around their neck with a combined weight of 15 kg.

The rings increase the apparent length of the neck by pressing down on the ribcage and, to a lesser extent, up on the jaw. Over time the weight of the coils distorts the musculature of the shoulders, bends the collarbone and ribcage, and compresses the lower jaw.

This creates the impression that the neck has been lengthened, though x-ray investigations have shown that the vertebrae that form the cervical spine are unchanged.

The practice leads to respiratory and cardiovascular problems, as well as distorted dental development, and has been associated with a significant reduction in life expectancy. If the coils are removed, the women are often unable to support the weight of their own heads.

The typical distance from suprasternal notch to the lower jaw is around 8–10 cm, varying somewhat with stature. The effects of the neck extension are even more dramatic when considered as a proportion of overall height. The woman whose neck was measured at 19.7 cm in the 2018 study was only 165 cm (5 ft 4 in) tall.