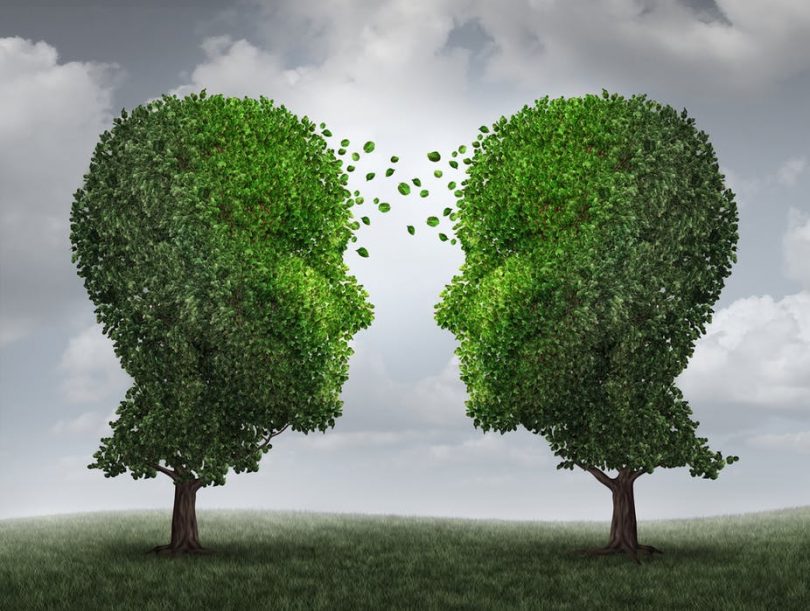 Trees talk. Their roots are connected through an underground network of fungi, nicknamed the “Wood Wide Web,” that allows them to share resources with each other. They “talk” by transmitting nutrients to one another through the fungi. For instance, a mother tree, or oldest and strongest tree in the forest, will share some of her sugars with smaller, nearby trees.

To communicate through the network, trees send chemical, hormonal and slow-pulsing electrical signals, which scientists are just beginning to decipher. Edward Farmer at the University of Lausanne in Switzerland has been studying the electrical pulses, and he has identified a voltage-based signaling system that appears strikingly similar to animal nervous systems (although he does not suggest that plants have neurons or brains).

Alarm and distress appear to be the main topics of tree conversation, although Wohlleben wonders if that’s all they talk about. “What do trees say when there is no danger and they feel content? This I would love to know.”

Monica Gagliano at the University of Western Australia has gathered evidence that some plants may also emit and detect sounds, and in particular, a crackling noise in the roots at a frequency of 220 hertz, inaudible to humans.

Trees also communicate through the air, using pheromones and other scent signals. Wohlleben’s favorite example occurs on the hot, dusty savannas of sub-Saharan Africa, where the wide-crowned umbrella thorn acacia is the emblematic tree.

When a giraffe starts chewing acacia leaves, the tree notices the injury and emits a distress signal in the form of ethylene gas. Upon detecting this gas, neighboring acacias start pumping tannins into their leaves. In large enough quantities these compounds can sicken or even kill large herbivores.

Trees can detect scents through their leaves, which, for Wohlleben, qualifies as a sense of smell. They also have a sense of taste. When elms and pines come under attack by leaf-eating caterpillars, for example, they detect the caterpillar saliva, and release pheromones that attract parasitic wasps. The wasps lay their eggs inside the caterpillars, and the wasp larvae eat the caterpillars from the inside out.