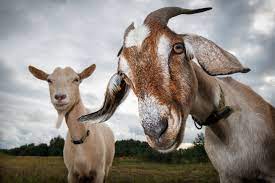 Research shows that goats are socially aware of the environment they’re in. They can “differentiate between other goats’ happiness or displeasure by listening to their voices,” according to National Geographic.

New research shows that goats can hear subtle emotional changes in goats’ calls, furthering our understanding about how animals perceive the world.

How animals perceive the world around them is still a mystery to us in so many ways.

That’s true even for smart, social animals like goats, whose charisma has inspired a whole YouTube sub-genre: dozens of videos that highlight funny and cute goat moments and have racked up millions of views. Sanctuaries like Goats of Anarchy that care for neglected goats have hundreds of thousands of highly engaged followers on Instagram.

A new study published in Frontiers in Zoology on July 10, 2019 has confirmed that goats can differentiate between other goats’ happiness or displeasure by listening to their voices. In other words, they can tell how one another is feeling. This finding carries potential implications for how goats in captivity—whether they’re kept for meat, milk, wool, or companionship—are treated.

Researchers involved in the study had previously concluded that goats can express emotion through their voices. Next, a larger team decided to explore whether goats can detect it in others. “If you’re not actually studying the effect of emotions on others, we’re missing an important social aspect,” says Luigi Baciadonna, postdoctoral research assistant at the Queen Mary University of London and lead author of the study.

The group worked with 24 goats at Buttercups Sanctuary for Goats in Kent, England, which rescues abandoned and abused goats in and around the southeast part of the country.