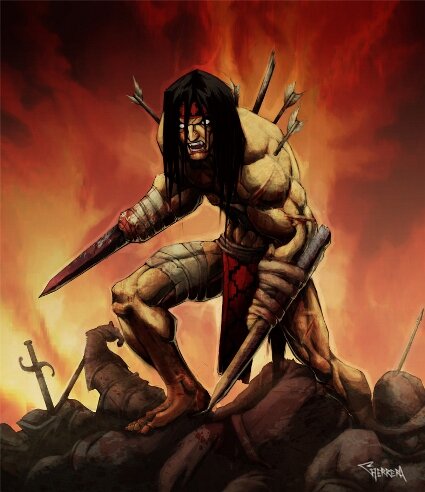 In the 1500s, Mapuche Warrior Galvarino had both hands cut off as punishment for defying the Spanish. He returned home, raised an army, and fought the Spanish with blades tied to the stubs of his hand.

Galvarino was a famous Mapuche warrior during the majority of the early part of the Arauco War. He fought and was taken prisoner along with one hundred and fifty other Mapuche, in the Battle of Lagunillas against governor García Hurtado de Mendoza

For as long as there have been wars, there have been warriors who have found a second life on the battlefield. Bloodied, maimed, shot, cut open, stabbed they are the ones who should have perished, but who nevertheless managed to stay alive and keep fighting.

According to Mapuche legend, after Galvarino’s left hand was hacked off, he bravely offered up his right and watched the hatchet fall without flinching. He then asked his torturers to deliver the killing blow a request that they declined.

Galvarino and the dozens of other mutilated warriors were then freed, and ordered to tell the Mapuche general Caupolicán to surrender and prevent further bloodshed. Galvarino did no such thing. Instead, he urged Caupolicán and his people to continue to fight against the Spanish intruders.